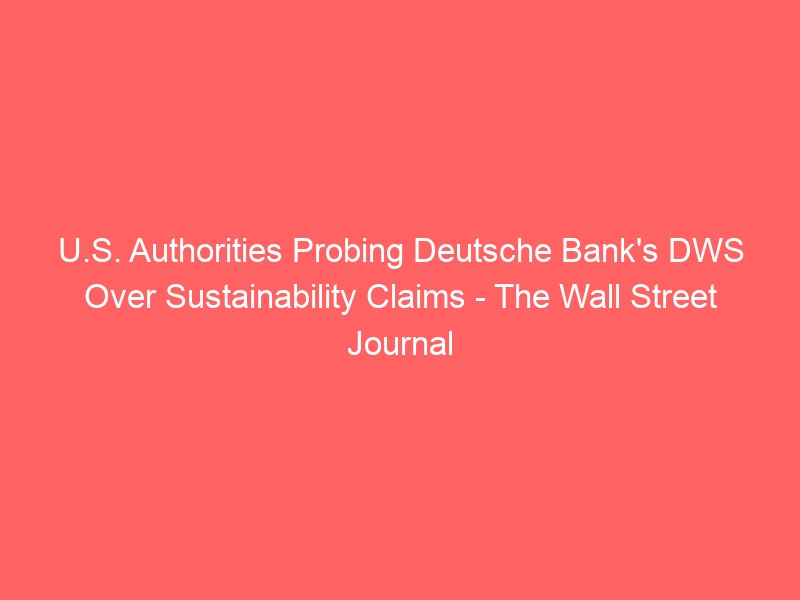 DWS said in its 2020 annual report that more than half its assets at the time were invested using a system where companies are graded based on ESG criteria.

asset-management arm, DWS Group, after the firm’s former head of sustainability said it overstated how much it used sustainable investing criteria to manage its assets, according to people familiar with the matter.

The probes, by the Securities and Exchange Commission and federal prosecutors, are in early stages, the people said. Authorities’ examination of DWS comes after The Wall Street Journal reported that the $1 trillion asset manager overstated its sustainable-investing efforts. The Journal, citing documents and the firm’s former sustainability chief, said the firm struggled with its strategy on environmental, social and governance investing and at times painted a rosier-than-reality picture to investors.

A DWS spokesman said the firm doesn’t comment on questions related to litigation or regulatory matters. A spokesman for Deutsche Bank declined to comment.

The probe is a setback for Deutsche Bank, which owns a majority of DWS, a separately listed company in Germany. The bank has reached several settlements with authorities and has been trying to convince investors that its legal woes are behind it.

In January, the bank agreed to pay $130 million to resolve separate government investigations into a commodities-fraud scheme and accusations that the bank violated bribery laws in an effort to win business. Under what is known as a deferred-prosecution agreement, the bank won’t face criminal charges if it abides by certain requirements, including compliance measures and cooperating with investigations, for three years.

The Wall Street Journal reported earlier this month that DWS told investors that ESG concerns are at the heart of everything it does and that its ESG standards are above the industry average. But it has struggled to define and implement an ESG strategy, according to its former sustainability chief and internal emails and presentations.

For instance, DWS said in its 2020 annual report released in March that more than half of its $900 billion in assets at the time were invested using a system where companies are graded based on ESG criteria. An internal assessment done a month earlier said only a fraction of the investment platform applied the process, called ESG integration. The assessment added there was no quantifiable or verifiable ESG-integration for key asset classes at DWS.

at the time DWS’s sustainability chief, told the Journal that she believed DWS misrepresented its ESG capabilities.

A DWS spokesman said the firm stood by its annual report and that an investigation by a third-party firm found no substance to Ms. Fixler’s allegations. He said standards for defining ESG assets are constantly evolving, and that DWS has been seen by the market as being more conservative than most of its competitors in the definition.

ESG has become a huge business for asset managers. Assets in ESG funds surpassed $2 trillion globally in the second quarter, almost tripling in three years, according to

Regulators say they may require advisers to disclose more about the criteria and data they use to pick ESG investments.

Investors want to make money while feeling they are contributing to a more sustainable and fair world. Given the demand, firms are rushing to classify their investment offers as ESG-friendly, sometimes stretching the definition, or making overblown claims.

ESG Magazine is one of leading ESG investments publications for ESG Funds and ESG Companies. It's based in London, UK.

We use cookies on our website to give you the most relevant experience by remembering your preferences and repeat visits. By clicking “Accept All”, you consent to the use of ALL the cookies. However, you may visit "Cookie Settings" to provide a controlled consent.
Cookie SettingsAccept All
Manage consent

This website uses cookies to improve your experience while you navigate through the website. Out of these, the cookies that are categorized as necessary are stored on your browser as they are essential for the working of basic functionalities of the website. We also use third-party cookies that help us analyze and understand how you use this website. These cookies will be stored in your browser only with your consent. You also have the option to opt-out of these cookies. But opting out of some of these cookies may affect your browsing experience.
Necessary Always Enabled
Necessary cookies are absolutely essential for the website to function properly. These cookies ensure basic functionalities and security features of the website, anonymously.
Functional
Functional cookies help to perform certain functionalities like sharing the content of the website on social media platforms, collect feedbacks, and other third-party features.
Performance
Performance cookies are used to understand and analyze the key performance indexes of the website which helps in delivering a better user experience for the visitors.
Analytics
Analytical cookies are used to understand how visitors interact with the website. These cookies help provide information on metrics the number of visitors, bounce rate, traffic source, etc.
Advertisement
Advertisement cookies are used to provide visitors with relevant ads and marketing campaigns. These cookies track visitors across websites and collect information to provide customized ads.
Others
Other uncategorized cookies are those that are being analyzed and have not been classified into a category as yet.
SAVE & ACCEPT
Generated by Feedzy